The new 3d ground scanner "Evolution" enforces what the name already promises. This deep scan detector takes another step forward in advanced metal detection technology. It is a stunning blend of functionality, ergonomics and futuristic design.

The device includes the following functionality:

A state of the art touch screen display and wireless bluetooth communication between the main unit and probe are only some of the innovative features. This device combines different high-end detection technologies in an extremely small, lightweight and compact easy to handle unit. The telescopic probe makes it easily transportable and rugged enough and suitable for nearly all terrains. he lightweight main unit with touch screen display can be mounted on the telescopic probe or carried on the wrist holder. This makes it comfortable for treasure hunters and prospectors in nearly every environment. With integrated LED lamps it is even ready for the dark. The device "Evolution" is the best introductory model to step in into the world of 3d ground scanning. It easily combines common metal detector technology with high performance ground scanner technology.

An Algerian treasure hunter successfully detected this 200 year old saber. The saber was found at a depth of 4.7 meters (15 feet) using the OKM Evolution. This historic weapon originates from the time of French colonial rule. During this period of time, the beginning of the 19th Century, France conquered Northern Algeria and began settling French colonies. 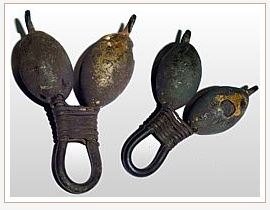 A treasure hunter found this metal object with his Evolution 3d ground scanner, which is used for the search of precious metals like gold and silver. The hunter did not give any information about where the item was found, the possible age or the intended use of the artifact. Supposedly it's a sort of musical instrument, probably a double-rattle. There are similarities with a Brazilian percussion instrument called "caxixi" which is usually made of rattan. The treasure is made of two hollow pieces, each similar to an egg. They are connected with a curved metal handle. A seal on one of the "eggs" can be an indication that the cavity is maybe filled with little stones or beads. A band wrapped around the handle is probably added for better handling (bearing area for the thumb).